With Paramount Pictures spending millions of dollars here on the making of Teenage Mutant Ninja Turtles 2 a lot of money is being spent, providing a business surge for some local companies. 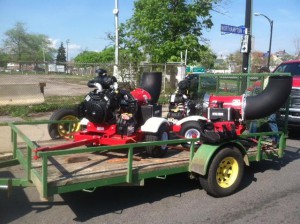 Most people have seen or heard those leaf blowers many landscapers and homeowners use to move leaves or grass clippings.

Sometimes, you need to move a lot of stuff, so you call Buffalo Turbine in Springville. Paramount did for two Cyclone K-B-4 blowers to get water off the 33 so it won’t interfere with crews creating an elaborate stunt for the movie.

“Everything from National Grid having extra crews on just in case one of the street lights goes out, to all kinds of things, catering and a variety of other things.”

Buffalo Turbine General Manager Paul Syracuse says the two blowers trucked up here for the film-makers are $7,500 each and are designed and made in Springville. He says Hollywood knows the company because it participated in the reality show “Showdown of the Unbeatables” two years ago.